An interesting interview with one of NYC-based tattoo artist, loaded with memories, hindsight and some sentiment. Def. good to read.

It’s been a long while since I did anything on here but … I do love this tiny corner of the web and I’m definitely going to do sth about it now and then! It’s a great way to track, record and document my own body modifications. It’s sth I love, sth that changed my life both for bettter and for worse and sth that made me who I am now!

My leg tattoo, devoted to running as I stated here, has been taking ages to make. Annoying as it might be, it just proves that life (and a body modification process) is a marathon, not a sprint! I keep joking with my tattooo artist, Slawek, that this tattoo is the longest tattoo in the making (we started working on it in 2010, it’s 2019 and we are not done yet!) EVER but such is life. This tattoo is a living proof of my determination, resilience, love for running and a strong will to finish what I started back in 2010!

The most recent session took place on December 10, 2018. It was a part of my long fun weekend. The first part of the said weekend was spent in Torun (my annual Santa’s half-marathon and some Torun fun in general) only to switch to Poznan to get some work on my never-ending leg tattoo done and – again – have some Poznan fun! When I arrived in Poznan, I was still a little sore after my half-marathon (esp. that I went for a very short run along the river very early in the morning in Torun!). Sometimes I have some mixed feelings about my tattoos – on the one hand, they aren’t as important to me as they used to be but – on the other hand – they are a very important part of me, they show who I am and what I believe in and I know I’ll never regret them! Regardless of my ambiguous feelings about my tattoos, I was quite excited nevertheless and decided to have as much fun as possible.

The guys at the studio were as friendly and hospitable as I remembered them! It’s always great to meet and hung out with Jacek the Piercer – we could talk for hours about everything possible and yet we’d still have a lot to talk about. And it’s equally great to meet and spend some time with Slawek with his quieter ways, fascinatiing interests and enthusiasm to learn and move forward!

I was booked for a whole day and since I was going to stay lil longer than just a few hours in Poznan, we didn’t have to rush anything.

We started from here: 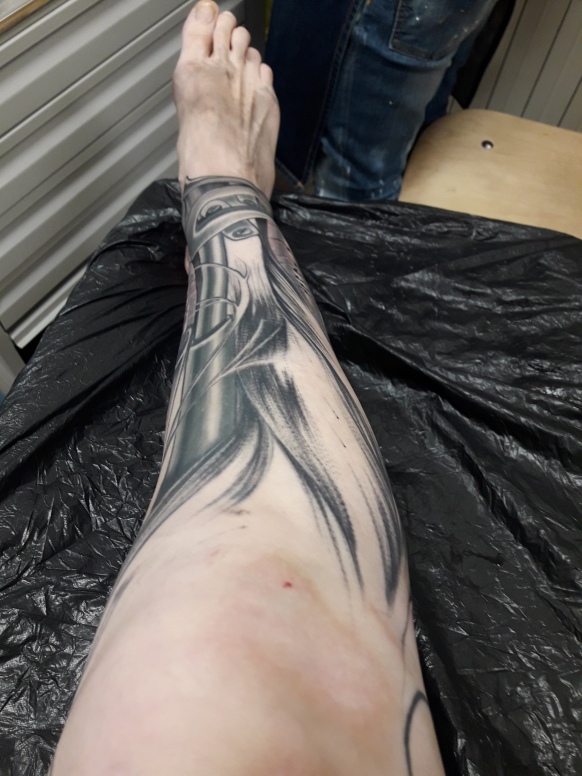 The calf was already done but my shin and ankle needed some coloring! Since it’s a bio-mech design, a lot of red ink was in store for me here!

Slawek colored my ankle on both sides and the feel was … interesting to say the least! It was quite painful and the way it made my bones vibrate was pretty cool. I’ve never been a fan of being tattooed over my bones (wrist tattoos? elbow ones? clavicles and sternum? – all of them done and so not thrilled about the process!) but if it’s an important part of the design, I don’t really have a choice, do I?

Tattoing the upper part of the shin was less painful but led to some bleeding which was interesting to watch.

From time to time my leg twitched which made Slawek’s work more difficult. Nothing new, tho, as it happened before. After two or three hours my leg swelled visibly but there was still quite a lot to do, so we continued the work. It was painful and it made me wonder why – was it caused by this tattoo or rather it was because I’m not as enthusiastic as i used to be? Whatever it was, I was glad I could push this tattoo forward, see some progress both on my body and in my mind. Body and mind should always go hand in hand!

When the session was over, my right lower leg was visibly thicker than my left one which was quite funny. At first I limped a little but it never was a big issue. Since I promised Slawek not to run for the first few days, I had to take a running break which was annoying to say the least. The tattoo healed without a problem and now I’m one step closer to having it finally done.

A pretty generic article by a Western woman who states how liberating and great her tattoos are for her! It’s quite personal, a lil revealing and – sorry to say – not very original altho it shows that tattoos/ body modification in general can have a positive influence on us. I’ve been there, too! 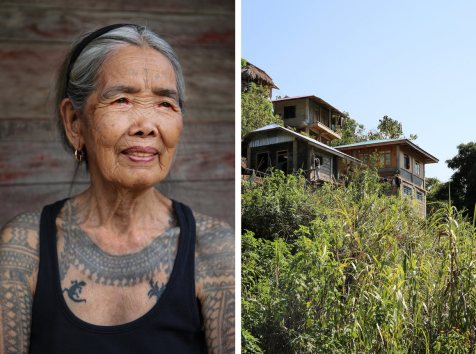 And … a very interesting article about a Kalinga female tattooist who fights for passing the torch of her culture and values to other generations and that’s not an easy fight! 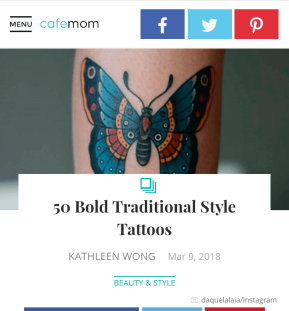 As time goes by, the meanings behind tattoos and their purposes change!

Ancient Egyptian tattoos prove how old and meaningful tattos are while the ultra modern and also funny diabetic tattoo kit shows how useful and fun tattoos can be, no harmful stereotypes attached!

The fascinating thing about tattoos, across the time and cultures, is that they always tell us stories – about our identity, social standing, opinions, life experiences. In a way, they are like an open book, not always written in an easy to understand language but out there for us to read and learn about! Two interesting posts in this vein: tattoos in a library and one man’s stories! 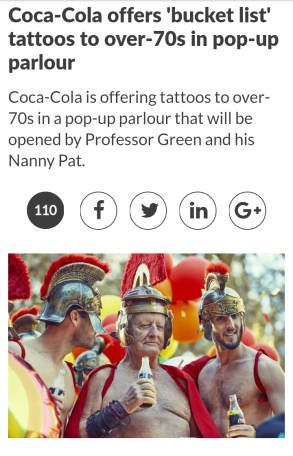 Coca-Cola offered tattoos for seniors. Sounds kind of great but it’s hard not to think about self-promotion, either!

A tattoo aftercare tip? Not really!

What I love about everyday-ness is its endless possibility to bring sth new, uncover a potential, show us sth interesting. And the same goes for ppl – at first they seem totally “normal,” (whatever it means) – without a spark of interest about them – and then, suddenly, we are able to uncover sth unique about them! Tattoos make it happen for us, so …

A day in a tattoo artist’s life – urban legends of the rock’n’roll lifestyle surround an everyday struggle to make things right, esp. those far from being glamorous!

Simple and some of them stunning – small pieces of the black-and-white tattoo art.

An interesting article about a painter/ tattoo artist – it’s a great upside of living here and now as it allows many people combine their passions. 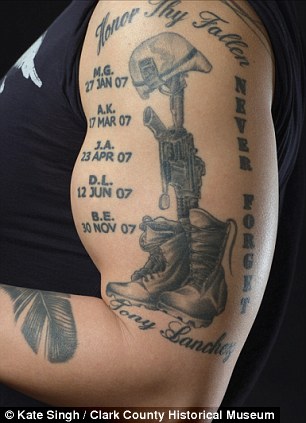 The exhibit “The Designs of Duty” focuses on military tattoos and gives the visitors a glipmse into experiences, thoughts and feelings of those whose tattoos are on display. Such exhibits are not very new but they are very important as they add context both to the tattooed and tattoos themselves and change the way tattoos are perceived! Tattoos and their eternal magic!

A great local initiative to help out – a fundraiser for Down Syndrome Association. It’s not cool to just have tattoos, it’s way cooler to have tattoos and be a decent person! 😉

It’s certainly the tattoo that’s been taking me the longest ever but – in a way – it reflects the ups and downs of my life! 😉 On October 16, 2017, a day after having run my second full marathon, I finally managed to add to my shin!

I’ll try to write up a text about it ASAP – for my own records’ sake and maybe someone out there will profit from it, too.