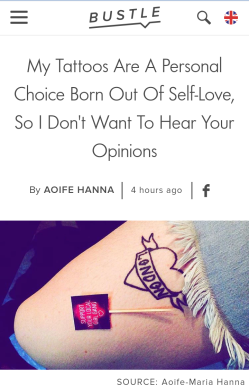 A pretty generic article by a Western woman who states how liberating and great her tattoos are for her! It’s quite personal, a lil revealing and – sorry to say – not very original altho it shows that tattoos/ body modification in general can have a positive influence on us. I’ve been there, too!

And … a very interesting article about a Kalinga female tattooist who fights for passing the torch of her culture and values to other generations and that’s not an easy fight!

Touching and empowering at the same time – a movement to revive traditional Inuit tattooing!

It’s never a subject on its own; it’s always a way to talk about other things. But let’s listen to it!

there’s a certain magic to this first tattoo ever! It may be – even now – some sort of rite of passage and we grow into someone stronger and more self-confident or … we become losers in the eyes of those who don’t understand! 😉 Down the memory lane – first tattoos ever!

And my first one ever was a little Chinese sign done in a street shop in the middle of nowehere in Indiana. It was a cool experience and soon I was back there, coming for more!

I came across the two articles by accident but I love how people combine their passions and life stories. It’s never about quality! It’s the stories that count!

Semicolon tattoos in Christchurch, New Zealand – small and cheap but they mean a lot to all ppl who either battle the suicidal thoughts or want to to support their family members or friends.

Artists 4 Israel and their wonderful initiative for soldiers and terrorism victims. It’s so true that “You can even produce beauty and freedom out of loneliness and suffering.“

Finally, something light and in Spanish as I’ve begun to be serious about this language. Cat lovers and their tattoos!

I def. love and hate how surprising my life tends to get and the silence during the last few weeks was caused by me living on an island called Sylt, a narrow stripe of land on the North Sea.

I was working in gastronomy there and was told to keep my tattoos covered. Given that most of the customers were old-ish and quite conversative, it def. made sense and I didn’t make any fuss about it. No one had anything to say about my ear jewelry, so I wore my Kaos eyelets all the time (as a matter of fact, one old guy commented on them, said that he never saw anything like this and asked if it hurt – why do ppl always ask about that is beyond me – it’s pierced, stretched, healed, taken a proper care of, end of story!). I do strongly believe (despite some very unpleasant experiences in the past) that I’m nice, good and smart enough to make ppl see past my appearance and come to respect me for my integrity, life and work attitude and generally trying to be a nice person.

As it happened, I got to work side by side with a woman whose son was a piercer in the only tattoo studio on the island. She actually promised to take me to the studio, so I could check it out, maybe talk to the piercer and so on but it didn’t happen. From what she told me, tho, looks like this island isn’t very tattoo-friendly (altho it isn’t openly hostile, either). The piercer works two jobs to make both ends meet (at the studio and as a security guy at a local snobbish night club – Sylt is famous for its nightlife full of local celebs and wannabes) as – let’s face it – well-off pensioners living on or visiting the island aren’t going to get tattooed or pierced very often, are they?

I got to see some tattoos on ppl – monochromatic bad work from scratchers, colorful better done tattoos on younger ppl, some old school small pieces. There were also some heavier pierced individuals – a few ppl with stretched lobes, septum and other facial piercings. No one tho seemed to be knowledgeable about body modifications and my microdermals kept stunning ppl and they asked me all the time how the micros work. As it often happens, ppl with some small tattoos showed me their tattoos when they saw mine – kind of “kindred spirits us” thing! 😉

Overall, a good thing is that most Germans seem not to care about the way other ppl look. If they do, they don’t say that aloud and don’t show they don’t like or appprove of such things. And – as Shannon Larratt always cared to point out – work hard, do your job as best as you can, try to make a difference and show others that “modified” doesn’t mean “bad.” 😉 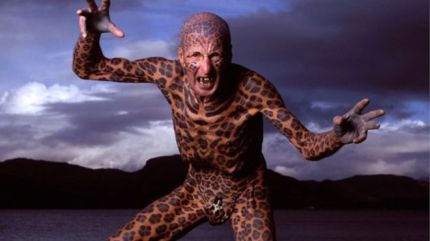 It takes a lot of courage, determination and strength to live the way you want! The Leopard Man certainly had all of these things! He died on June 12. He was one of the first ppl in our world to undergo the full body transformation.

Tattoos and work make for a very sensitive issue! And even tho one always should fight for their right to self-expression, sometimes a neutral image is a must as this story shows!

How old is too old to get a tattoo? The sky is the limit – the world’s oldest tattooee is 104!

And sure he must remember the old times when tattoos really were mostly on sailors and bikers! “Flesh and Ink: Tattoo Histories” is a new museum exhibit in Potsdam, NY. 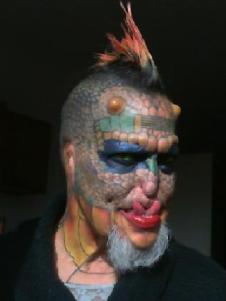 Tiamat is yet another person aiming at a full body transformation!

Finally, a great reminder that April is a autism awareness month and a great time to gather some funds to support the noble cause!

I’ve already posted about Tin Tin and his recent fight to make tattooing recognized as a form of art. Here’s another one as it’s definitely worth some pondering.

This tattoo artist, as many others like him, proves that Tin Tin is right not only on the definition level but also on HR level – more and more tattoo artists have a very profesional, educational background and they should be called artists. Not to mention the fact that they are trying to give back to their local communities! 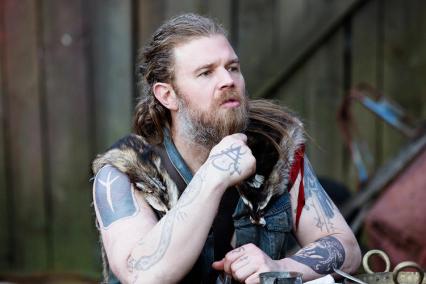 Tattoos convey who we are. Here’s an interesting article focused on an actor discussing tattoos as a tool to build a film character.