It’s Halloween and let’s enjoy it!

The first piece of news is a lil creepy indeed – the *in*famous and amazingly creative and talented Paul Booth is launching a jewelry line with some of his best pieces on the front line! Booth certainly has a dark army of followers!

Dress code again – as it seems, English/ British police officers are quite tattooed under the covers and maybe there’s a time to rethink the dress code policy. Nicely put, too: ‘Having a design inked on your body, even if it is clearly visible, has no bearing on someone’s ability to carry out their duty to serve the public and as our survey found in some cases it can act as a great icebreaker and a way of breaking down barriers, particularly with young people.‘

On a side note, I actually got hired despite my ear adornments and – as it seems – many employees at this particular establishment don’t follow the dress code and the employer is pretty lenient in this regard, too. At least a few female co-workrs have small ear projects with multiple ear piericngs and one guy sports a stretched lobe. We’ll see how it goes but one thing is sure – NO ONE should make us feel bad about our own choices and tastes!

Finally, an interesting subject regarding both body modification and body issues – plus size women and their tattoos. Big is beautiful after all!

Semicolon tattoos in Christchurch, New Zealand – small and cheap but they mean a lot to all ppl who either battle the suicidal thoughts or want to to support their family members or friends.

Artists 4 Israel and their wonderful initiative for soldiers and terrorism victims. It’s so true that “You can even produce beauty and freedom out of loneliness and suffering.“

Finally, something light and in Spanish as I’ve begun to be serious about this language. Cat lovers and their tattoos!

“Daily Mail” about an interesting photography project involving gang members, tattoos and their hope and fight to begin a new life! The book will sure be a fascinating overview of these ppl’s lives.

Chefs and their own stories behind their tattoos – as Anthony Bourdain showed in his “Kitchen Confidential,” it’s quite hard to be firsta  cook and then a chef, so there are lots of emotions put in such tattoos.

Purely biological on the onconscious level? How we perceive ppl’s bodies, tattoos included.

A new exhibit in Chicago and an opportunity to get tattooed – 2 in 1, a good idea!

Finally sth in Polish – a change of rules in favor of the tattooed in the Polish Army?

A German article discussing the so-called professional appearance and tattoos at work suddenly became more relevant as maybe I’m about to lose a very interesting job opportunity due to my aesthetic choices (“one piercing per ear” for female employees vs. my two stretched piercings per ear). Painful? Sure enough! Better to say now that later? Definitely as I remain an honest and professional potential employee regardless of my looks and choices!

On the side note, do tattoos influence how we think? No! Do our mods make us less intelligent? No! Does the number and size of our piercings make us less honest, reliable and professional? Definitely no!

Personally I love the way my ears look, especially when I’m wearing clear eyelets and my ears look clean and natural! I love the combo of tattoo sleeves, white shirts and ties! I love being surprised by ppl of various age, background and looks proving that intelligence and goodness know no boundaries!

A new tattoo dictionary (not the first one of this kind on the market) highlightens the many and various meanings of modern tattoos, often going way back in the past. 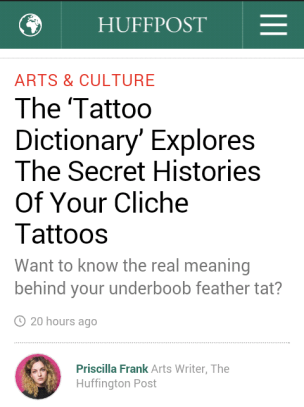 An article trying to present body suspension as a very new and very shocking phenomenon while – in fact – it’s none of the above. 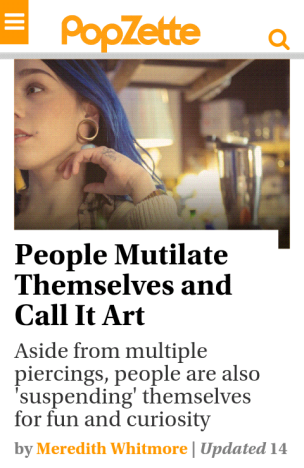 My mailbox is totally clogged with all the Google Alerts from the last few weeks and my phone offers me again newsfeed focused on selected topics. Before I catch up, here are two interesting articles focused on traditional tattooing:

Japanese tattoos with all their traditional and modern complexity and some stunning pictures of modern tattoos!

“Ancient Tattoos” gives us a short overview of tattoos over the centuries! Scary that I bought the book referred to 2 years ago and didn’t have time to read it!

I def. love and hate how surprising my life tends to get and the silence during the last few weeks was caused by me living on an island called Sylt, a narrow stripe of land on the North Sea.

I was working in gastronomy there and was told to keep my tattoos covered. Given that most of the customers were old-ish and quite conversative, it def. made sense and I didn’t make any fuss about it. No one had anything to say about my ear jewelry, so I wore my Kaos eyelets all the time (as a matter of fact, one old guy commented on them, said that he never saw anything like this and asked if it hurt – why do ppl always ask about that is beyond me – it’s pierced, stretched, healed, taken a proper care of, end of story!). I do strongly believe (despite some very unpleasant experiences in the past) that I’m nice, good and smart enough to make ppl see past my appearance and come to respect me for my integrity, life and work attitude and generally trying to be a nice person.

As it happened, I got to work side by side with a woman whose son was a piercer in the only tattoo studio on the island. She actually promised to take me to the studio, so I could check it out, maybe talk to the piercer and so on but it didn’t happen. From what she told me, tho, looks like this island isn’t very tattoo-friendly (altho it isn’t openly hostile, either). The piercer works two jobs to make both ends meet (at the studio and as a security guy at a local snobbish night club – Sylt is famous for its nightlife full of local celebs and wannabes) as – let’s face it – well-off pensioners living on or visiting the island aren’t going to get tattooed or pierced very often, are they?

I got to see some tattoos on ppl – monochromatic bad work from scratchers, colorful better done tattoos on younger ppl, some old school small pieces. There were also some heavier pierced individuals – a few ppl with stretched lobes, septum and other facial piercings. No one tho seemed to be knowledgeable about body modifications and my microdermals kept stunning ppl and they asked me all the time how the micros work. As it often happens, ppl with some small tattoos showed me their tattoos when they saw mine – kind of “kindred spirits us” thing! 😉

Overall, a good thing is that most Germans seem not to care about the way other ppl look. If they do, they don’t say that aloud and don’t show they don’t like or appprove of such things. And – as Shannon Larratt always cared to point out – work hard, do your job as best as you can, try to make a difference and show others that “modified” doesn’t mean “bad.” 😉