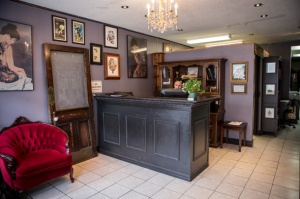 The face of the tattoo scene has been changing over the years and now it has less and less to do with rebellion, alternative scene and underground things. But it’s pretty cool to see that tattoo shops also want to break the negative stereotypes and show that tattooed people are alos family (wo)men. This Canadian urban blog post describes it so-so but at least it brings our attention to the way things change!

And here something that resembles the *in*famous Jerry Springer Show: tattoo addict’s wife sleeping with a monster! Would she prefer to sleep with one of My Little Ponnies? 😉