If this article about a medical use of eyeball tattooing procedure, it gives a niceexample of cooperation between an eye surgeon and a tattoo artist.

Also along somewhat medical lines, tattoos and skin cancer in the Washngton Post and an article about earlobe reconstruction (not necessarily because the said earlobes were stretched).

A trailer and an article promoting ‘Tattoo Nation” doc.

And straight from the Modblog (it’s nice when they update) about a documentary about Mark ‘Little Swastika’ whose work has been admired by many for years.

This year’s London Tattoo Convention is over but a lot of things was happening!

A new book dealng with my favourite tattoo questions (what, why, what does it mean to you) – ‘Pen and Ink.’ 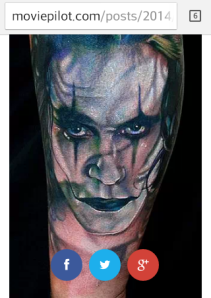 Horror tattoos and some of them not bad at all!

Dress code-related – musings on whether firing over tattoos should be illegal and new rules in turkish schools. On the upside, Korea is considering legalizing tattooing. 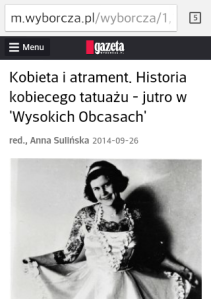 Mixed feelings about this article published in this weekend’s edition of ‘Wysokie Obcasy,’ a weekend extra of one of major Polish newspapers. On the one hand, it’s good when tattooing gets more publicity and keeps losing all the negative associations; on the other hand, however, it would be nice if journalists did their research for once.

Even without much digging and error hunting in this piece, it’s too easy to point out at least a few errors and omissions:

– a picture of Lady Viola is used as a picture of La Belle Irene (this mistake can even be excused as some websites make the same mistake; I’m relying here on the BME encyclopedia and ‘The Tattooed Lady’ book by Amelia Klem Osterud – if these sources are wrong, so am I);

– a picture of an Ainu woman is there for no real reason as tribal female tattooing isn’t discussed at all and that’s a shame;

– the New York City’s tattoo ban was, according to the author, related to a HIV outbreak while, in fact, it was related to a few cases of Hepatitis B (HIV was discovered later);

– the author mentions using only one book while working on the article and it’s a shame, too. And even tho I do can understand that it might be hard to get more reading material, if I were this journalist, I would have just visited some local tattoo artists to see what books they have at their studios and this way I could read more than just one book (not to mention that there are many websites, good ones, focused on the history of tattoos).

I hate when there are mistakes in articles; it always makes me wonder what else is wrong in my reading materials and I’m usually too lazy to cross-reference and check the facts on my own 😉

There is some weird appeal in the Reebok videos about their Reebok Forever challenge; I do agree with their statement that fitness is a lifestyle and I do know how much it takes to train your body to run longer distances, stretch deeper than ever before etc. I have, however, really mixed feelings about Reebok’s statement that ‘size matters’ only to proceed to encourage people to ink themselves with the corpo logo of theirs. Whatever rocks your boat, tho.

The American RW gives us a different take on sports tattoos. Here size does not matter as it’s all about running spirit, keeping great memories right on your skin and encouraging you to keeping going. Two good slide shows and meaningful tattoos on passionate people!

Once it was a sign of belonging, a symbol of social status and a reason to be proud. Today African people wearing traditional scarification face scorn and become objects of ridicule. Here’s an article on an interesting photo project by an African photographer.

Scarification in the West has also some traditions and, in men, even accidental scars were a reason to be proud of one’s strength and endurance. Today we discover this form of body art anew and make it our own. The masters of blade can do wonders with our skin but the price if very high!

entertaining and succinct and yet still somewhat educational!

it’s also worth checking out different takes on the video.

This article posted on BBC struck a chord with me, of course, seeing how barely a few months ago I lost my own job because of my body modifications! I can totally relate to the stories in this article and despite feeling hurt and unjustly treated I still hope that there are more open-minded and accepting people out there and those too closed-minded to actually understand that people differ from one another don’t deserve much respect! Body modifications are more than just some people’s prejudices!

Dress code is still a hot topic and it’s been of special interest for me lately (no wonder!). there’s an optimistic approach to the issue and the opposite view as well.

‘Diversity’ in the workplace is another interesting topic worth some of our time and thoughts. Diversity can be about so many things after all and everyone, no matter their beliefs, gender, looks or dis/ abilities etc. should be treated well!

A new book about body art (it should be available in October!)  Hopefully it’ll be a good one! (already pre-ordered 🙂 )

Tattoos and people’s meanings behind here!

Poland 🙂 some reports from the recent Cropp Tattoo Convent in Katowice.

The pop culture recycles motifs and characters over and over again whether we like it or not. For me, Conan the Barbarian will always look like Arnie even tho Jason Momoa is so much more handsome. Frank Langella seems to me a better Dracula than Gary Oldman even tho I liked the refined, dandy-like look of Oldman, with a slight touch of modernity and an attempt to deepen the old vampire story.

So whats’s about the new Popeye? Sony Pictures Animations plans a new reincarnation of the sailor to appear in the movie theaters in 2016 and now they are teasing us with some pieces of news. As it seems, the new Popeye won’t have a pipe (definitely understandable!), he won’t chomp on spinach (altho it might change as veggies are trendy more than ever) and so far he doesn’t have his trademark anchor tattoos which is very hard to explain.

Since the comments sections are always the most interesting, going thru them shows that it may be really difficult to many people to accept a tattooless Popeye. As one of the commenters stated: ‘sucks if the pipe isn’t there but I can understand why… however, no tatoos?‘

Every new version of well-known motifs says a lot about its times and people. A tattooless sailor in the age of omnipresent ink seems a bit off to say the least 😉

It started in June and culminated now when the Scotts finally could vote ‘yes’ or ‘no.’ Aphra Wilson of the Spaghetti Tattoos was a spiritus movens of the ‘Yes’ tattoos. Interestingly enough, there were more people voting ‘no.’

It’s not the first event of this sort ever, of course, but there seems to be a very positiive, exciting atmosphere around this one. A local libary in a not overly well-known New Zealand town called Wanganui organized a series of events focused on tattoos. Septmeber is a tattoo month for Wanganui and the experiences taken from it will make people more open-minded in the future. 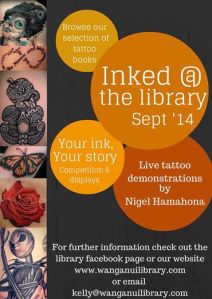 Huge thanks to Bastian for drawing my attention to this article on Samppa Von Cyborg. The article is decent and more than just  the shock value. Weirdly enough, yesterday the link took me straight to the article while today it takes me only to the website. Oh, the wonders and mysteries of the Cyber World 😉