There’s always a great mix of topics on the Net and I actually enjoy switching form one subject to another. You can approach body modification from many angles, too!

A kind of social angle: a tattoo artist who really is just a normal guy, far from the *in*famous rock’n’ roll lifestyle of many tattooers, who actually tries to change the way ‘normal’ people usually think about heavier tattooed people.

A gender/ entertainment angle: an interview with a tattoo model and septum piercing and celebrities.

A satirical angle: unbelieveable body modifications (let’s have some laugh at these ppl’s expense, shall we?).

A ‘that’s so cool, man’ angle: 26 amazing body art pictures (not all of them are that amazing, tho).

I remember sitting at a railway station somewhere in  MI, waiting for a friend to pick me up and my impression was that MI was everything but pure. And yet that was apparently just my first glimpse and I should have looked more closely as MI is pure and there are people who wear it proudly stated on their skin! The place we come from defines us more than we think after all!

Only three today but interesting ones. 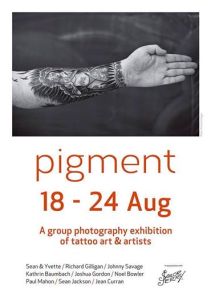 From the US, an article about the Tattoo Archive in Winston-Salem, NC. Always good when someone passionate tries to save the past for the future!

Bits and pieces today but they are all still interesting!
First of all, a nice array of brave people who decided to change their outward appearance to reflect their inward feelings. The Lizardman included!
Tattoos presented as personal preference and professional persecution (big words!) and a German one presenting tattooing as a profession.
Travelling passion reflected on skin in an article about a girl collecting her tattoos in the places she visits. A little related: tattoos in modern China.

Battery tattoos soon may be yet another example of e-tattoos used in many different fields. This one I would love to use myself and for my mp3players (esp. the one I use for my runs).
WWF Russia and their campaign to raise awareness of endangered species with a little help from tattoo artists. Also related to tattoos and animals, a short text and a video about a certain horse and a tattoo that’s supposed to save the horse’s eye.
An article about growing popularity of tattoos among seniors for dessert. More tattooed people –  less prejudices? 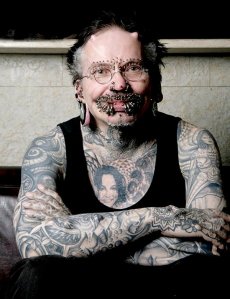 Rolf, the most pierced man in the world, was denied an entry to Dubai for security reasons (or black magic as wants one source).

Interesting as it seems, it’s more of gossip/ sensation for me, so here you have an interview with Rolf where he talks about some of his modifications instead.

Today I planned only a visit to the local Dom (cathedral) which silhuete I can see every day during my runs along the Main river but since I’m feeling some slight time pressure, I also decided to go to the Weltkulturen Museum (conveniently located on the Museumsufer, a long street full of many different museums by the river).

The current exhbition is ‘Foreign Exchange (or the stories you wouldn’t tell a stranger)‘ focused on the history of collecting artifacts for the museums and everything related to it (colonialism, white ethnocenrtism, racism, ‘saving’ and exploiting traditional cultures, ways to perceive the museum collections and how they were/ are created/ stored/ presented).

Right after buying my ticket I was informed that I wasn’t allowed to take any pics, so even though I had my phone all out and ready, I don’t have even one picture of the exhibition. It’s a shame in a way but on the other hand, when we take pictures something gets lost – we focus so much on photographing our adventures that we don’t have enough of our time and attention to really experience here and now!

The exhibit isn’t big, just a few rooms but it contains many interesting artifacts and photographs. I liked the way some of the photographs were described (in German) – nouns, verbs, adjectives barked at the visitors, a stream of conscience of sort not only to inform but also move and show how objectified the ingenious people used to be and how ‘other’ they still might seem to ‘us,’ whatever ‘us’ means (although it usually means ‘white/ middle class/ relatively well off’). The photographs are in a few different sizes, from big posters to just ‘thumbnails’ showing copies of old photographs from the times when ‘white man’ was always better, wiser and stronger than anyone else. Kenyan girls selling bead necklaces by the road, passed/ stared by a group of white people in an automobile, amused and curious of the Other;  a group of black girls clad in the white man’s fashion taught by a white noun in the middle of African nowhere, a black, long gone man in some traditional clothing and a lip plate. Who were these people, what were their stories, how come that the only trace of their existence is now not even on original photographs but on scans, copies, something to be stared at?

Other visitiors stared at me, I did stare at other visitors… a fleeting encounter only to switch to different experiences, places and people. Bored guards making sure no one takes any pics and yet surrounded by them.

A very cool, intense experience. If I got to read more about the exhibit beforehand, I’d have experienced it so much better, tho! 🙂

‘Anniston’ would be more likely associated with a certain Jennifer than a place in Alabama and yet there is such a place in this state. As it happened, there was one Percy Waters who lived there decades ago and he was, according to his own words, ‘just a good tattooist.’ This article from a local newspaper gave me goose bumps (in a good way) as I just love these spare morsels of early tattoo history and I would love to have such bits and pieces in the Polish tattoo history. Hopefully someone out there will also find it a good read.

And to make it even better, let me link here to another tattoo history-related post about the early history of American tattooing. They’re quite lucky to have relatively well documented past in this regard!

Seems like the author of this article/ slide show doesn’t ride the local U-Bahn as I’m *not* featured in the slideshow! Not really sure whether I should feel relieved or ignored 😉

Indirectly-related to this story, last week a random woman approached me on one of the main U-Bahn stations to ask me where I got my ivy sleeve done only to smoothly switch to complaints how there are no good tattoo artists in Frankfurt am Main. In a small place outisde the city (after all, I use this U-Bahn thing for sth!) a young guy saw my sleeves and asked me for some local shop recommendations. Obviously, tattoos are still a good conversation starter and people badly need some pointers as it’s easier than just doing some research (?)

During my morning runs along the river I seldom get to see tattooed people (or, at least, as heavily tattooed people as me now) but tattoos don’t seem to raise eyebrows around here and no one seems to (mis)judge me only because I look a little unusual. I make sure to smile, say my ‘danke schoen/ bitte/ schoenen Tag’ and do my best to prove that a tattooed/ modified person doesn’t equal any pathology. The lady whom I helped with cleaning her silvers didn’t even want to count them down when I was done. One small success at a time! 😉

I would post some pics taken by me but still no WiFi!

My friends from Tattoo.pl (and I miss these guys awfully!) had an idea for a holiday contest combining tattoos and some good time on vacations. The tattoos don’t have to be done by them only, so if you are in for some fun, go ahead and submit some interesting pictures.

The contest lasts till September 6. I so would participate just for the heck of it but I’m one of the social network outcasts and the only FB I actually do is visiting Tattoo.pl page on work days! 😛

For all of us playing the role of outcasts, Sex Pistols’ ‘holiday in the sun.’ 🙂

A visit in the Palmengarten today where I came across a comic book ‘Asterix bei den Pikten.’ Since it’s about tattoos in a way, I bought it.

The Picts remain mysterious even now, so one can make them be many things. The Asterix series made them humorous, not very heavily tattooed (or painted for that matter) and pretty much as rebelious as the famous Gauls. Overall it makes for a funny and light read!