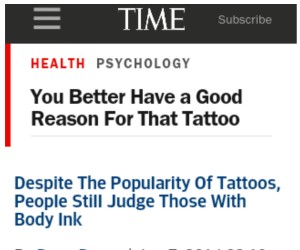 Dress code again as it’s still quite controversial. One of the Ottawa Convention Centre workers got back to work but since we live in a small world these days, we know that such things happen all over the world. Examples? A German woman’s application to the police forces was denied due to a tattoo on a forearm.  In Australia a man was asked to cover his tattoos while at a night club. The Time magazine and other magazines, too, ran articles on prejudice against body art and based them on an academic research and subsequent article titled ‘stigma of ink: tattoo attitudes among college students’ (the highlights being:

Fortunately, it wasn’t all that depressing and ‘the whole world against us’ thanks to an article about a German heavily tattooed lawyer who seems to keep his cool about his own ink and the way the world treats him!

Kind of ironic: 2 in 1, a pre-school teacher and a tattooer – the principal doesn’t mind and she even got some publicity. 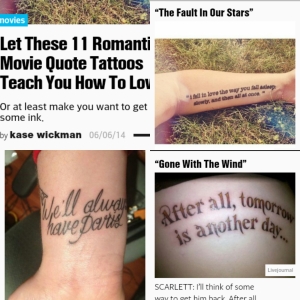 Movie tattoos: famous movie tattoos and romantic movie tattoos. Nothing new but making the body art more popular and less scary (unless it’s the villains only that are tattooed).

An NBA and tattoo enthusiast and his magnum opus: a blog devoted to NBA tattoos.

Tattoos in NFL: Madden 15 video game and for the first time it features some tattoos. Also games-related: Tetris game turns 30.

Lars Krutak’s book review in German: ‘Magical Tattoos and Scarification.’ Adds lots of depth to pop pulp of the many modern tattoos 😉

Popular tattoos: cat tattoos in NYC and soccer-themed tattoos in Brazil (where else now?)

It’d certainly unusual and allowed me to refresh my very rusty Swedish: a needle lost in a tattooer’s body 40 years ago finally removed (in Swedish). Hard to believe actually! 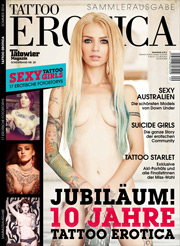 Eye candy for men: a German magazine Tattoo Erotica celebrates 10 years anniversary (kind of sexist cover – why there aren’t that many tattooed guys on the magazine covers? and liberating as body art can be, it still objectifies women in many ways!) and a short story of the Suicide Girls.