it may be my last post for a while (or maybe not), so let’s take a look at this:

The video is a lil weird, I do admit, but the article attached to it 😉 is certainly worth reading. Maybe you won’t agree with all the words and maybe you’d like to rephrase the experience itself with your own words but it’s too beautiful and amazing to just simplify and condemn it! 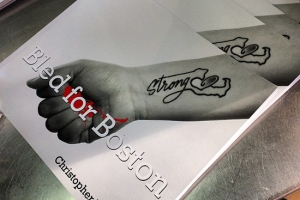 If you are a runner, marathon holds a special meaning for you. You may have run it tens of times already or you’re thinking about doing it for the first time ever but, granted, once you start running and feeling how your body becomes fitter and fitter, you also start thinking about venturing outside your comfort zone and facing the Marathon Beast!

Among countless marathon events held every year all around the globe, the Boston Marathon is very special! It’s the oldest modern marathon race; you can’t just sign up and go for it, you have to earn the right to run it; it’s a legend on its own!

What happened on April 15, 2013 shocked pretty much everyone, not only runners! But you can’t stop or break a runner, so no wonder that soon after the bombings Bostonians and their supporters started helping one another, fund raising and just showing that no matter what, the race is still on!

Christopher Padgett, an American photographer, stepped out and recorded people’s stories, sacrifices, losses and strength and presented it in a book ‘Bled For Boston.’ It’s a moving collection of photographies of people who were witnesses of a tragedy and whose lives were changed. They wrote down their stories by means of their Boston tattoos and grew even stronger!

The only downside of the book? It’s too short! 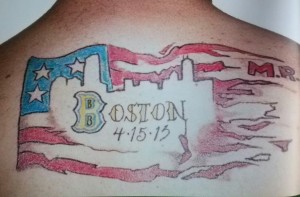 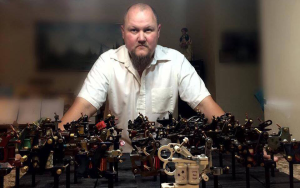 According to the WHO, app. 250.000 people world-wide die from burns every year and many others suffer from pain, scarring and high medical bills. Casey Keener, a fan of tattoos and a burn survivor, decided to help the Children’s Burn Foundation and is organizing an auction of tattoo machines. The whole profit from the auction will help the child burn victims. 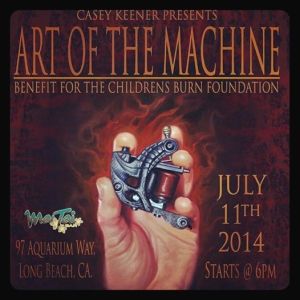 Keener set up the Art of the Machine and the auction event which will take place on July 11. Among those who donated their own tattoo machines is one of the first female tattoo artists, Kari Barba. 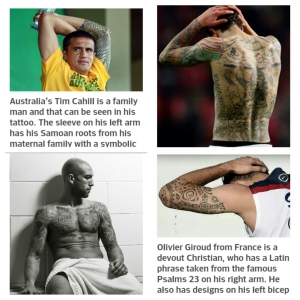 The World Cup in full swing, so no wonder that there are still lots of articles related to football and tattoos. Here you can read about footballers with the coolest tattoos, footballers with iffy Asian tattoos, international connections reflected in the players’ tattoos, temporary face tattoos and the biggest fan of one Brazilian football club.

Tattoos and jobs make for a fascinating topic on their own. Tattoos in the US Army, tattoos in Hawaii Police Department (Oahu), tattoos and police in Germany, certain professions and their taboos.

Tattoos and Christians. An American televangelist declared tattoos as a heathen practice; coincidentally, thousands of miles away, a German pastor is very interested in having a group of tattooed people for his community/ parish Sunday celebration. Also, Christian tattoos are getting more and more popular which must be a final proof of the strange charm of Evil!

A book review: ‘Playing With Identity’ book (about tattoos in Poland).

International Body Piercing Day took place yesterday! This day is also Jim Ward‘s b-day and without him everything would have lookeed way different for all of us!

And that’s something I came across yesterday: an interview with a Polish mother-daughter team of tattooers on Polish TV.

A huge gulp of acceptance, open-mindness and normalcy – in this shop the world always seems better than it really is! 🙂 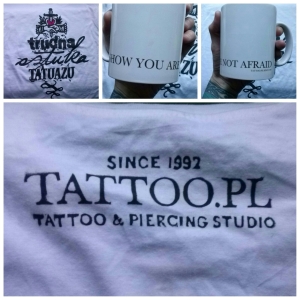 Have you ever wondered what kind of father is a guy covered with tattoos? One Polish journalist asked herself this question and came up with a story featuring several tattooed fathers sharing the stories about their children and their tattoos. 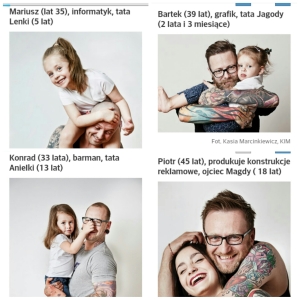 I must admit that I hate the initial question. Fatherhood doesn’t depend on tattoos or the lack thereof. What kind of father are tattooed people? Exactly the same as non-tattooed ones – some of them are awesome fathers while others totally suck at it. The Polish story was saved for me thanks to its content, though – the fathers are interesting, emotional and strong enough to admit that being a father changed everything for them. The pictures are not bad, either!

What kind of father are you then? You can find an answer here but the best way to go is to be close with your kids and feel their love!

There’s this cool ancient Greek concept called kalos kagathos which I definitely dig (and using slang is just a way to play with languages, really!) and ESPN magazine has been bringing it to life every July for a few years now! And it really doesn’t hurt to see so many athletes are tattooed!

Human body is beautiful on its own when you start thinking about it but when you look at fit, active bodies, you just have to admire not only the beauty on the outside but also on the inside as it takes a lot of strength, self-discipline, determination and sacrifice to achieve the fitness level of the athletes featured in the magazine!

Since I just treated myself with a copy of ‘Bled for Boston’ book (hopefully soon in my mailbox!), let’s start with books: another article, this time in Dutch, about a book ‘Why I love Tattoos’ and a piece of news concerning a new book by Lal Hardy.

For book lovers who are not that commited to tattoos: temporary book tattoos.

Tattoos in museums: Jessica Harrison and her tattooed figurines plus Henk Schiffmacher lecturing on the history of tattoos next weekend.

Body modifications at work again thanks to a young woman from Canada who decided to fight against the stereotypes. Editorials written in response to her actions don’t let us cherish any illusion about her possible victory. Interestingly enough, enough the famous dr. Mark Benecke seems not to be immune to prejudice although this Bild article sounds very strange.

But there are fascinating stories behind people’s tattoos and we shouldn’t forget about it. A Polish article focuses on just that but a story from the Washington Post about Ian Desmond and his fight against NF is way more interesting.

‘10 things you might not know about tattoos’ – give it a read.

In Birma there’s a thing #11 you didn’t know about tattoos – with a video and in German.

‘Modified charity’ from Philippines where tattoo artists supported kids in need and also tried to show their sensitive side.

In Scotland ‘Yes’ tattoos even though there’s still some time to the local Scottish independence referendum.

This week there was quite a few articles about Daniel Hindle – a British teenager who died from septicaemia as a result of a body piercing in 2003. Since then his mother devoted her time and strength to raise awareness of dangers and lack of legal regulations of body piercing in the UK. As she states on the website devoted to her project ‘Dan Aid,’ “The resource is neither pro nor anti piercing, its aim is simply to help you equip young people with the knowledge to go out into the world and make their own informed decisions about body piercing.“

The resource mentioned here is a resource pack designed to use by professionals working with young people.

It’s very interesting and good to see that schools are willing to educate young people on such a subject! The subject itself is very delicate and must be handled properly; hopefully, the DanAid project will be able to change things for the better!

DanAid is present also in other cyber places, such as Twitter and FB.

Apparently we are very easily amused but there is something quite amusing about this video of a father put off by his son’s tattoos!

The articles are short and shed very little light both on the son and the father involved. It ceratinly makes one think, though, why the father is so much against tattoos and why the son puts the father in such a position. Surely there’s time to let go and respect other people’s choices?

Or maybe it’s just a game between these two, a sort of an inside joke which all of us missed?