There aren’t many things out there that make me raise my eyebrows. This one did! An article about a fashion magazine convincing a few of its readers to get tattoos of stylized portraits of current top (tomorrow gone) models makes one wonder what this is all about! 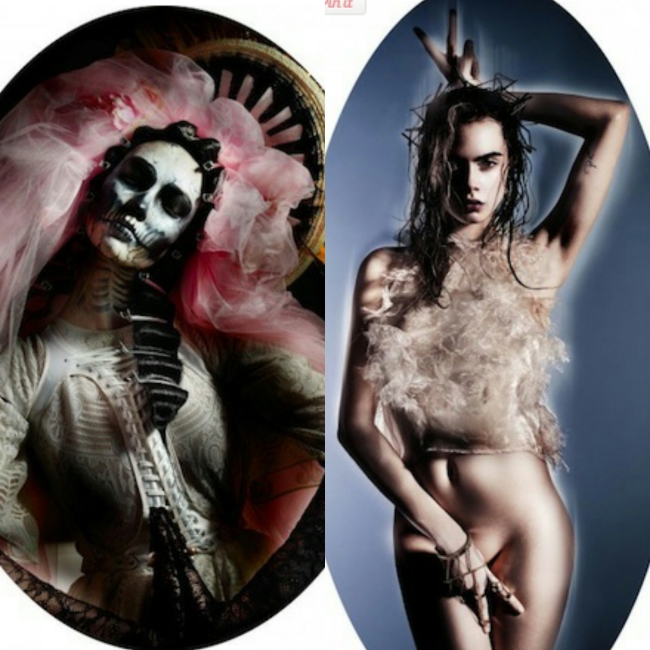 As the article states, the photographer standing behind this project’s aim was “challenge fashion’s fleeting nature by creating an editorial built around a permanent form of art: tattoos.” I have never heard about the model called Karlie Kloss and the other one, Cara Delevigne, is known for her tattoos which she allegedly loves and keeps making headlines for getting new ones pretty much all the time. Is it really about love for tattoos or rather more about trying to grab as much of people’s attention as possible? If she really loves tattoos so much, does she give enough thought to her new projetcs or she just goes with the flow and gets the ink without much consideration for anything? Does she think about a message she sends to young people, girls mostly, by means of her reckless actions? In the future she might be lucky to be able to afford tattoo removal while some of her followers might get stuck with ink they will have grown out of. The other models who took part in the project, Rosie Hungtington-Whitley and Georgia May Jagger, also can be big names now but, with the speed the modern pop culture swallows, digests and spits out its ‘heroes,’ they won’t be remembered by many very soon.

The tattoo artists behind this ‘fashion project,’ a.o. Scott Campbell and Dr. Woo, are big and hot names both in the tattoo world and pop culture. They can be happy to be part of such a project as it may help fight off the negative stereotypes about tattoos and really show that tattoos are a form of art. Shouldn’t they, however, also think about the skin they work on? There are living people behind this skin – people who perhaps made a not that wise decision of getting a tattoo without meaning, without much consideration, only to be noticed and included for a few minutes at best? Scott Campbell recently painted a beautiful work of art on his life partner, Lake Bell. It shocked some, raised eyebrows of others and caused lots of talking. The goal, whatever it was, was achieved and human skin was not hurt in the process. Why so permanent now then? (unless it’s a hoax, of course, but still, it’s worth some thinking!)

It seems that there’s a growing tendency to use tattoos as a way to advertise, encourage to follow, beocme a (not real) part of something seemingly big and important while in reality it’s just a temporary stunt! Not to mention that you can also trade your skin for concert tickets!

30 Seconds to Mars and One Direction asked their fans to get tattoos of the bands done in order to be a part of their new video/ movie – was it a good way to show their fans that they really matter to the bands? No but it made headlines and encouraged underaged fans to look for ways to get a tattoo, even if it meant breaking local legal regulations, risking infection or catching a blood-borne disease. Definitely not nice! And well, if your band is really that good and influential, you really don’t have to ask people to get tattoos; they just do because your music means something to them.

In another twist of tattoo art, a French tattoo artist Sebastien Mathieu, has tattooed onto bottles of whiskey! It’s definitely a very interesting idea and no human was hurt in the process but again, it makes you think how much the meaning of tattoos and our approach to it has been changing!

Let’s think! It started with people marking their bodies thousands of years ago in order to heal, include, make themselves look attracive or be members of a given tribe/ people. It had been like that for thousands of years, occasionally it was also a way to mark a criminal (like in Japan) or a fugitive slave (ancient Rome). Then the white, so-called civilized people came and took the concept of tattooing to use it as they liked it – freakshows, tattooed aristocracy, criminals. Then some members of the same ‘white people tribe’ took tattooing and used it as means to express their individuality, create their own aesthetics and maybe mark important moments in their own life. Tattooing is still used this way for/ by millions of people.

On the same time, however, tattooing has been robbed from its meaning and symbolism. Tattoos seem to be everywhere and yet they mean nothing. They are just fleeting images that are easy to get and even easier to get rid of, at least for those who have lots of money and are too high on their 15 minutes of fame to really understand what they are doing.

Times change and some of these changes are more than welcome. But there are changes that are very questionable and exploit both ordinary people and long traditions important to many cultures in the world.