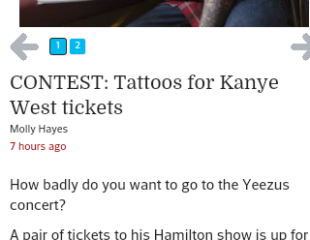 A local contest offering tickets for Kanye West’s concert if you get a tattoo related to West makes one think how popular and lightly taken tattoos have become (at least in certain countries).

I did some digging as I remembered the uproar caused by 30 Seconds to Mars’ call to their fans for tattoos of the band. It also turned out that exactly the same thing did the very popular One Direction band. When they realized (because others told them) how irresponsible this idea is, given their fan base, they quickly pulled the offer.

Other, less popular, bands also have tattoos and some of them approach them with some humor. Here you have a band called Eagulls (a word play on the Eagles?) and how they won Bill Murray’s love. Less humorous, but still bearable, is this article about a band called Against Me! and their tattoos (a sample of their music).

‘Every body has its story’ was quoted by me quite often here. A few more samples of this saying: teen tattoos (meanings, dangers, legal issues), ‘tattoo stories – diverse and intriguing as the people who wear them’ and college students from NE discussing their own ink.

This upcoming event will certainly make for a great story: Scottish independence referendum (going to happen on September 10, 2014) and how people express their feelings toward Scotland and the UK.

A Polish article on dangers of tattoos (mainly because of the ink(s) used for tattooing) seems to confirm, in a way, a statement from the Polish book on tattooing I’m currently reading ([there is] some cultural lag/ delay in our country [Poland] in comparison to other, already individualized Western societies [when it comes to tattooing and other body practices] – this topic certainly isn’t new and there were many articles published on the subject years ago (here just one example from last year!). It shows how even  respectable newspapers go for the big headlines to attract our attention and feed us with the recycled goods!

Something really positive for dessert:

It’s been a while since I posted anything about ‘modified charity,’ so it’s only proper to do so now: a Canadian tattoo shop has been organizing a fund raiser for cancer hospice for a few years now . A recommendable idea and a great example how no matter what color you are, you still can be a good human being!

It’s going to be my first embedded video here: are tattoos sinful? A very old topic but a verey interesting take on it by Jefferson Bethke!