It’s not the event itself that makes  a good impression on us; it’s the people we meet and things we do that make us like a given place and event and that’s truly the case with TattooFest for me!

Basically, all tattoo conventions are exactly the same – rows and rows of stalls behind which a tattooist or a piercer crouches, trying to impress us with their skills or, more often than not, not really caring of what a random convention visitor may think about them. No surprise then that over time I’ve kind of grown this “ok-let’s-go-and-do-whatever’ attitude toward it. There are always, though, highlights and that’s a good thing.

Cracow is a unique place! It’s almost a small country in this country and its inhabitants pride themselves with artistic inclinations, imagination, creativity and urban identity that really is like no other. Here you can find high-tech modernity only to get lost in narrow streets full of wannabe old Jewish shops with everything possible to find inside. You can eat McJunk and then grab a few bagels from a street seller. Whatever the reason you come to Cracow is, the city always plays a big role in your visit and that’s awesome.

As usual, this year I also went there with people from my regular tattoo shop although this time we didn’t drive there together. I just hopped on a night bus and arrived there very early in the morning. After some enjoyable play with my Kindle, I decided to set out in search of breakfast and, of course, I went to Kazimierz district which is famous for its old feel and many places to just sit, eat and people watch. It was still very early in the morning, though, so not many places were open. You could see, however, people already busying themselves with morning shopping or selling many weird things at a local bazaar.

This first morning in Cracow I ate two hearty breakfasts to kill time while waiting for the guys to arrive (strangely enough, they didn’t even have to ask me where I was; they just got straight in to our favorite breakfast place and there I was, drinking my coffee and reading a weekend edition of my fav newspaper). The breakfasts they serve in the second place of my choice are absolutely delicious and we made sure to repeat the experience next morning. 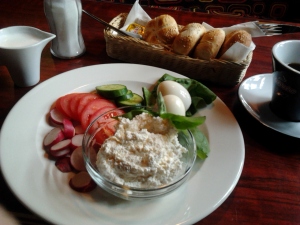 Full and quite excited (although not very clean!) we arrived at the venue some time past 2pm which meant that the whole setting up chaos was over. The venue’s been the same as for the last few years although this time only one floor of the venue was occupied. The place was already quite crowded with black-clad people covered with tattoos and piercings.

The first tentative stroll along the aisles of the venue showed me who visited the event this year. There were many of the Polish regulars here, JuniorInk, Black Star, Anabi Tattoo etc., but there were also foreign artists from Hungary, Sweden, Germany and Canada. Many of them impressed with ingenuity of attracting people’s attention and their stalls were decorated with stuff for sale – t-shirts (always a big hit, it seems), stickers, buttons, tattoo designs etc. Most of the artists were already busy with working on customers and focused only on that. TattooFest brand’s stall made the biggest impression, though, with tens of t-shirt designs available for sale and stacks of old issues of the TattooFest magazine. The brand has come a long way from its quite humble beginnings and it seems to be doing really well now! 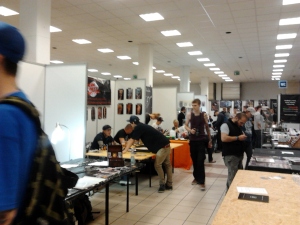 The first contest was more about entertaining the audience than presenting people with good quality tattoos as it was the ugliest tattoo contest. Raga, the MC who works the event and crowd every year, encouraged, mocked and comforted the victims of their poor tattoo choices and the audience was having some fun, too.

The jury, the same for the last 6 years or so, appeared on stage later in the afternoon and, wise with their past experiences, quickly got to work in the most efficient way possible. There were quite many people eager to show off their tattoos and see what so-called experts think of them and the lines of contestants were really long at times. The quality of the work exposed to judgment varied – some of them were very nicely done, with fine lines, great perspective and good drawing skills, others were massive blocks of colors promising to hold on for years to come and yet others were delicate and subtle. There were, however, way too many fresh tattoos which colors were vibrant but told nothing about how they’ll turn out in the future.

Designs-wise it definitely was a nice change from the previous years as there seems to be less and less dark, heavy Gigeresque work with not even a pinch of originality about them. There’s no tribal work to see anymore and women definitely prefer other placements than the infamous lower back spot. There’s more and more bigger pieces and at times I was really stunned to see tattooed hands on very young people. Interestingly enough, there was also one half-sleeve done traditional, tapping way made by a Polish tattoo artist.

Once the contests were done, there was time for more entertainment and, again, it was a suspension show (it seems as if suspensions became almost obligatory at such events which, IMHO, cheapens it and makes it a mere filler). This time it was Superfly Suspension Crew with Coco Katsura as a guest.

It took some time to set up the stage and that’s always interesting to watch. Once it was done, Coco Katsura was first to start the show. She relied heavily on the Japanese culture which, sadly, meant lots of missing points and purely visual effects on the audience. People were there to watch only, not to understand and one could see and hear it during her show. At times like this, when confronted with elements of a foreign to me culture which I know only a little about, I do feel a need for a kind of modern chorus that would provide us with most basic information about things going on stage and this enrich our experience.

After Ms. Katsura we were shown some bondage show (I couldn’t help not to notice how bored the models seemed at times) and then suspensions. Standing in the middle of the crowd, caught up in their emotions and (very good, very visceral) music, I still felt dissatisfied as there was nothing I haven’t seen before and thinking that this show was not a show but barely a “just for show” thing and, again, missed the *in*famous Bobo’s Loco Carneval  whose shows resonated so much stronger with me and whose pranks and tricks I did understand and could place in space and time to make it deeper and cooler for myself. 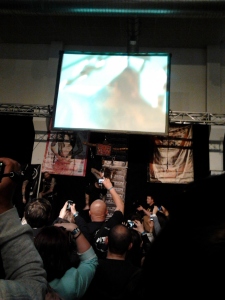 But the night just started for me and my friends as straight from the TattooFest venue we went to take part in 7@nite event – visiting Jewish synagogues opened for just this one late spring night. We visited only one but there was a rock concert going on in this one and the atmosphere was really good inside. We called it a night with some unhealthy food from a street vendor and the guys went to the TattooFest after party (turned out it ended before they even got there) and me going to the hotel (and thus having the bathroom all for me, so I won in the end!)

The second day of the convention seemed to go slower and there were less people attending the event; many participants either already packed up their stuff and were getting ready to leave or were thinking about leaving, so there wasn’t much fun. I made a few rounds around the venue, flipped through one of books by Lars Krutak which I found in one of the stalls (I sooooo wanna have this book!!!), grabbed some promo stuff for personal and friends’ use and soon enough found myself watching the tattoo contests unfolding in front of my eyes. Again, some nice pieces, some interesting ones and quite a lot of mediocre ones. And before I even really noticed, that was it for me, the end of this year’s TattooFest.

The organizers made sure to entertain visitors with latex clothing and crazy hairdo’s shows; they gave us some controlled madness and blood with the suspension show and provided us with opportunities to see tattoo artists at work. For those intellectual ones there were a few lectures on the subject although this year I didn’t manage to go to even one of them, so can’t say anything about their contents or quality. The event ran its course in a predictable way and that’s quite a shame as I’d prefer to be grabbed by the face and hit right between the eyes with some new and amazing things. TattooFest is a well-established brand by now, though, so who knows, maybe next year they’ll do just this thing?

One response to “all loud at TattooFest’12 – tattoo convention review”