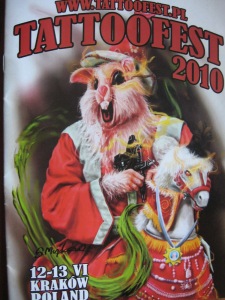 It’s been just over a month since this year’s Tattoo Fest in Cracow, Poland, and let’s just blame the current wave of heat for me not having posted anything about it sooner!

The heat is quite relevant here, though, as the Fest, celebrating its fifth anniversary no less, was tormented by the heat as well! Just when we stopped complaining about the cold and rain, we became favored by high temperatures and it didn’t help that the whole event took place in a big expo place that very early in the afternoon was heated by the sun. Not that it bothered us that much; after all, who doesn’t like to show some more of their tattoos off?

The first thing you got to see after entering the event premises was a huge stand with the Tattoo Fest merchandise. It’s obvious that by now the Fest, organized annually by the local tattoo shop Kult, became a big brand itself and it enjoys quite good a reputation so far. I remember the first Fest I attended, back in 2007, in its second edition, and the t-shirt I bought myself then – an S size but so big that there’s room for three Anias in there and with not a very appealing image on the front. This year I grabbed myself a very nice (and nicely fitting!) t-shirt, black with white lettering on front, which is a proof that the Fest keeps evolving and the people behind it constantly try to do better than the last year!

The first day of the event was slow, as usual at such events. Artists were finishing their booths only to focus on work a little later on; visitors were strolling around, flipping through the portfolios and business cards, now and then grabbing something to eat (the food and beverage prices were awfully high, though!). I was doing exactly the same thing and quite enjoying myself although I must admit that I tried to go outside as often as possible to find some shade and even slightly lower temps.

This year’s jury board consisted of Slawek of Tattoo and Piercing studio Poznan, Junior of Junior Ink, Warsaw and two other guys from Gdansk and Grudziadz. All experts in their field, with a good eye and enough balls to defend their opinions. Brave and articulate how they are, though, they didn’t have any saying in the first contest that took place right at the beginning of the convention, the ugliest tattoo category. The audience hadn’t been properly warmed up and ready yet then, however, so its reactions were rather subdued and restrained.

Things were soon to be changed, however, and later in the afternoon, many of the visitors approached the main stage to watch closely the tattoo contests. Everything went smoothly and quickly (both the organizers and the judges learn from their experience!) – the pace was fast, majority of tattoos was good and the interest in it was quite high.

Tattoo conventions are not only about selling merchandise, staring at other people’s tattoos and buying way overpriced candy bars and the organizers sure know this. Among the attractions provided were a karate show, an art exhibition where some of the tattoo artists could present their skills in mediums other than human skin (its title, quite rightly, was ‘Instead of Skin’) and there were also activities involving people visiting the convention as well – a few mannequins were given to those willing to show their artistic vein to paint them as they pleased. The final effect was quite interesting and most mannequins were sold. There were also two music shows (I especially liked the Wadada concert – there’s something nicely hypnotic to the sound of drums, especially when you are among people aspiring to be the Modern Primitives!) and an auction of the art items with profits destined to help the local ZOO.

The second day of the convention was a little more relaxed and ran quite smoothly until there was time for the Altered States Suspension show. Now, I love the fact that there is finally a Polish suspension group but I would love it even more if it was more professional. Their performance was scheduled for 5.30pm and even though a small delay would be totally understandable, they were way more than just ‘slightly’ delayed and there never was any form of apology from them! No wonder people waiting for the show to start were growing impatient and more and more irritated!

When the guys finally started, I tried to make sense from what I was seeing but it was quite hard to do it! So you see a guy clad like a medieval monk that sets up the stage; two prominent features of the stage are two tied up girls (a nice try on bondage elements but, honestly they were far from being subtle!) who are going to be suspended by the ropes from a suspension rig. The girls are dressed differently and you start wondering if the monk and the girls symbolize being exposed to various temptations and an ability to resist them but, sadly, the answer never comes. After a very long while of tightening the knots, suspending the girls by the ropes etc. there was finally the moment for the show to begin but, as a whole, it was as anticlimactic as the whole waiting activity the audience was forced to do first. The doubtful climax of the whole show were probably two guys suspended the suicide mode and swirling around with the tied up girls and then on their own. They never did any spectacular tricks, there was never even a sparkle of mystic, ‘altered’ atmosphere and, as a whole, it left me feel disappointed and missing the Bobo’s Loco Carneval even more than before! To quote a German guy I got to talk to before the ASS show, we still have a lot to learn when it comes to suspensions and related to them performances and I never was as ready to agree with this statement as right after watching this particular suspension show. 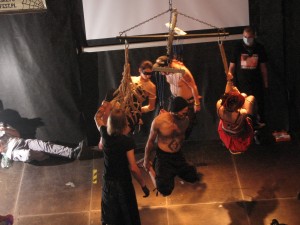 There were the final moments of the convention as well, delayed as they became by the suspension perfomers. Many people already left the event and there was only a small handful of people under the stage to watch the Best of Day tattoo contest. At least artists had more time to finish their pieces before presenting them to the critical eyes of the judges. One of the winners was an artist from Buena Vista Tattoo Club whom you can see below! 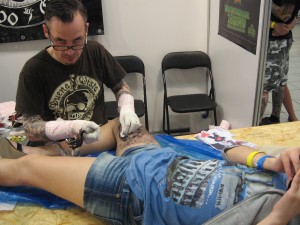 All in all, a pretty cool event with many attractions and foreign shops presenting their work. It’s obvious that the Tattoo Fest keeps evolving and becoming better with every passing year which gives even more hope for the future!