A small delay due to unreliable Net;

Not that many interesting links but there are always some worth our attention:

As a huge fan of books by Stieg Larsson, let me throw in this one not really directly related but it still discusses tattoos: interview with Noomi Rapace who played Lisbeth Salander in the ‘Girl with the Dragon Tattoo’ movie.

A tribal touch in ‘Tahitian face a canvas of life’ and a Polish slide show focused on the book ‘Ancient Marks’ by Chris Rainier.

The tattoo industry in Hawaii is going to have its own tattoo magazine!

Entertainment: if you are into games, Yakuza 3 may mean something to you; here’s a short article about Horitomo who’s behind tattoos in the game.

A tad of humor in an article about ‘fingerstache.’ 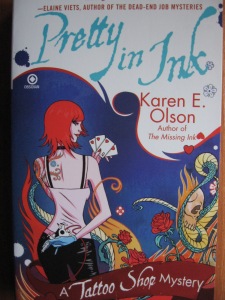 The second part of ‘Tattoo Shop Mystery’ Series was just published and either it is growing on me or the author managed to get better at writing about tattoos in the totally-popular-and-not-so-serious way!

Let’s start with the bad stuff, though.

I do hope that I am mistaken but it seems as if there are certain patterns in the series which make it quite predictable (and that’s a crime on its own when it comes to detective novels, taken lightly or not).

Just like before, the main character, Brett Kavanaugh, a female tattoo artist based in Las Vegas, gets involved in a shady affair resulting in a death of one of her clients (previously, her client didn’t die but death followed her anyway). Makes one think that it’s not that safe to be tattooed by the owner of the ‘Painted Lady’ shop!

Just like before, no one likes Brett snooping around and trying to find out what is going on but, as before, she can count on her brother, her staff and her competitor-slowly-turning-into-a-friend.

Just like before, Brett is single and overly eager to get into a relationship again. Apparently Olson’s readership target may be young single women dreaming about love and romance even in not that romantic settings.

Just like before, there are several phrases that Olson seems to love so much that she can’t resist the temptation to use them more than once every few pages: Brett’s phone doesn’t ‘blast Springsteen’ anymore but this time it’s ‘warbling ‘Born to Run’’ that appears over and over again and let’s not forget about Brett’s pajamas set because this one, definitely not trivial detail is mentioned at least thrice in the novel.

Unfortunately Brett, again, doesn’t seem to be more knowledgeable about other forms of body modification and she still sports very 80s ‘hoop earrings’. Characters in this novel sport either some tattoos or some more common piercing but, again, there is nothing about stretched ears, split tongues, implants etc. Too bad that Las Vegas is shown more like a place good to grab lunch at than a place with many tattoo and body piercing shops haunted by people either brave or insensible enough to test their bodies’ limits.

It’s all forgivable, though, as Olson seems to have learned her lesson and she quit this awful manner of referring to the tattoos as ‘tats’ or ‘ink.’ Sure, there are a few minor slips when she mentions ‘ink’ or tries to smuggle in ‘inking’ meaning the tattooing process but a big improvement in this regard is easy to notice anyway.

She also tries to be more educational when it comes to tattoos, so we can read a few descriptions of the sensations one can feel while being tattooed (where did she take them from, though, if she isn’t tattooed herself?) and even a sort of aftercare guidelines. This part, however, does not really convince me.

I have one good reason for why to actually bother with reading this book, though, and it’s the fact that one can look at it as a kind of document showing how tattoos are perceived through a lens of pop culture, here and now. It is covered with lots of overly sweet icing and there is nothing about the real life and what drives people to get tattooed, what they have to face on daily basis in certain settings and what it actually feels like to be tattooed but that’s the way the popular culture works – always diluting reality, selecting the catchier elements and aiming for becoming ‘in,’ even if only for a while.

Olson is a decent storyteller with a trace of a sense of humor and an ability to write light, fast-paced stuff. She may try too hard to show the world she doesn’t know much about but it’s not a serious offence. If you don’t know much about tattoos and you’re into the Ink TV, you’ll find it pretty good; if you are into tattoos and have more than one tiny one, you’ll find it amusing at times but also showing you that these days tattoos are mainstream and ‘cool’ enough to write entertaining ‘pulp’ novels about them.