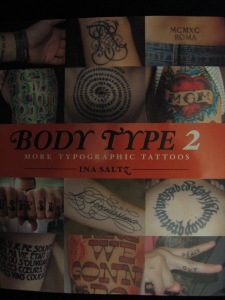 The power of words, magic of typography and simple beauty of fonts are back thanks to Ina Saltz’s ‘Body Type 2’ and it’s as good as the first volume.

The book is modestly captioned as ‘more typographic tattoos’ which clearly points out to continuing the idea from ‘Body Type 1’ but – since it’s about ‘more’ – the author managed to avoid repetitiveness and was able to focus on a few tattoo themes that didn’t get enough attention before.

Just like before, the introductory part is very interesting and even though it doesn’t focus as much on typography itself and replays the event that made it happen, it shows how the first part of the book changed its author’s life (apparently Ina Saltz became a sort of expert on tattoos) and she shares it with a sense of humor and inner joy. Quite touching are the fragments when she discusses the impact the first part of ‘Body Type’ had on its readers and their families that were able to understand what is so fascinating behind the tattoos. Not surprisingly, the book became quite popular and has a potential to be a kind of ‘cult object,’ especially among designers and typophiles all around the world. In short, soon after it was published, the book started to live its own life, appreciated and admired in many corners of the world.

Is the same going to happen to ‘Body Type 2’? It’s quite possible, seeing as the second part is laid out in the same manner as the first one and contains more ‘intimate messages etched in flesh’ that show both originality, human emotions and the beauty of simplicity.

Some tattoo motifs appear again, i.e. love, faith or literature/ poetry but there are also some new themes, such as ambigrams, music or numbers. All of them are, again, captioned with short background stories and it’s probably this part of the book that makes it so special – a chance to get an insight into unknown to us people’s lives who seem to have nothing in common with us and yet share passion for tattoos and literature/music/love with us, bringing us closer to one another and showing us that we are not alone with our hardships, successes and dreams.

It’s a short read-up but it’s also this kind of book that invites a reader to come back to it over and over again, always being fresh and inspiring. Definitely recommendable!