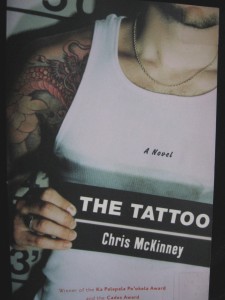 The title of this book promises something a reader won’t find in it – tattooing doesn’t play here a big role and is rather a pretext to tell a totally different and yet still interesting story.

It is set in Hallawa Correctional Center, one of (presumably) many prisons in Hawaii but then it splits into two streams and it follows its narrator to places he saw and experienced. When Cal, a white and mute prisoner turned into a tattoo artist, doing jail time for murdering his wife, meets his new cellmate, a Japanese guy named Ken Hideyoshi, both of them experience a travel back in time to see their lives, good (if any) and wrongs (way too many) in a new light.

As one of amazon reviewers stated quite cleverly, Cal is white and mute to show even more strongly all the wrongs the white people have done to the Hawaiian people and to finally let them speak out loud, even if quite metaphorically. To a degree it’s quite true. Cal is the only white man who has anything to say in this novel and he obviously never speaks, he just thinks. If the white people are mentioned here, it’s in negative light and as seen by the ‘natives’ and Asian immigrants. One would be very wrong, however, if took it as a sign of hatred on the author’s part. It’s rather a way to show the situation many Hawaiian people are in and how desperate and hopeless they feel.

Ken was growing up immersed in books about heroes of the past, both these European and Japanese ones. His friend Koa, a descendant of an aristocratic Hawaiian family, lives in a dilapidated house watching how the land that once belonged to his family and his people is turning into wasteland with brown water, eroded soil and dying forests. Both he and Ken can only watch how foreign tourists come to Hawaii to see the Paradise, painfully aware of what is really going on under the beautiful but very thin cover.

Ken wants to get out from his father and lack of perspectives; he wants to change everything for better. When he comes to the city on the other side of the mountains he thinks he got what he wanted only to land in the middle of another, much worse a disaster. When he comes back to his father’s house, to prepare for a new, calmer life with his love and their child, things go amiss again and he notices, on Koa’s example no less, that life is not a fairy tale and there’s never ‘and they lived happily ever after.’

The story is told at nights, with Cal working on Ken’s backpiece consisting of Japanese kanji for ‘The Book of the Void;’ Ken’s way to show his love for the old heroes, his love for Miyamoto Musashi and, maybe above else, the way he sees himself.

One could tell that it shows how ‘every body has its story’ and how there are fascinating and complex stories behind people’s ink-stained skin and that would be true to a tiny degree. It wouldn’t, however, change the fact that in this novel tattoos are only a pretext to show something else, something more important and usually unnoticed, the fate of people who lost. It’s true that Ken gets a tattoo paying, in a way, tribute to his heritage and rules he would like to follow and it’s true that Koa wears a traditional Hawaiian tattoo to maybe feel closer to his own heritage and lost pride but tattoos are not what this novel is about.

For people to whom Hawaii is only a name of a certain place somewhere in the world reading this book and acknowledging what it is about demands some trust in the author’s views and knowledge of the subject. No matter what the real situation of many Hawaiians looks like, it’s certainly true, though, that there is no real Paradise and human nature is able to stain and ruin everything it touches. When some win, others lose and no one cares about them. When they start caring about themselves in few left to them ways, things may get even worse.

The novel may be difficult to read to non-native English speakers or even those native ones who are used to ‘proper’ English – many dialogues are in Hawaiian pidgin English which requires some effort to follow and understand it. For language nerds, as myself, it’s an interesting experience, though.

‘The Tattoo’ is a novel that shows one how life changes people and how the past, race and way people live in influence and shape them, whether they want it or not. It’s not an easy and fast read but certainly one worth a try, even if there’s not too much about tattoos per se in it!

3 responses to “book review: the tattoo”