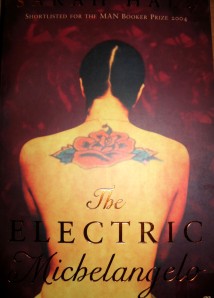 It’s year 1921 and Cyril “Cy” Parks is about to start his lifetime adventure and career as a tattoo artist. His apprenticeship, as he feels is, lasted a decade and was as ‘old school’ as one can possibly imagine. His master and teacher is eternally drunk and abusive and yet his personality is empowering and fascinating to Cy. From his early childhood exposed to the mysteries of the inside of the human body envelope, Cy learns how to look at human body from new and different angles and yet only many years after he comes to know that human skin is yet another body organ, as crucial as any others.

It’s year 1933 when Cy’s master dies and it’s time for him to become a full-fledged tattooist himself. Leaving behind everything he knew so far and moving to the Promise Land across Atlantic, Cy cannot leave behind his memories of the two people that mattered the most to him, his mother and his tattoo master, and they are always with him, in the new world and in the nooks and corners of his own inner world. Cy can’t leave his past behind him but he assumes a new name, the Electric Michelangelo, and builds his world anew from old demons of memory and new places and new people.

It’s spring 1940 when Cy meets Grace for the first time and something moves within him, ready and yet hesitant to open and let her in. She’s a fascinating and odd woman, gentle and rough at the same time; a part of the circus world thriving on Coney Island and about to become the Lady of Many Eyes, ready to undergo a metamorphosis thanks to Cy’s tattooing skills and to make Cy change himself.

There are seven important characters here and only four of them are people; two others are places, totally different and yet similar with their carnival-like atmosphere, crowds coming in and out and a feeling that anything can happen. Cy’s childhood’s world is the coastal Morecambe in England, a place to which ill people and tourists come in search for illusionary salvation and temporary rest; his adulthood’s haven is the American Coney Island, a vast and bustling freakshow, not immune to the changes of time and human moods and wants.

And finally there’s the art of tattooing which mysteries, beauty and ugliness appear over and over again in-between the lines of the novel. Tattooing here is not always shown as a glorious art that makes people become who they want to be. Tattooing here is shown as a complex art on the fringe of the society (it’s a novel about the past after all) that demands a serious approach, imagination and sensitivity founded on the thick skin. The tattooist’s job is not only to adorn their customers with flash designs, skulls, daggers and images of frivolous women, but also, or maybe above else, to deal with human skin, smell of people’s fear and doubts, their blood and sweat. Tattooing here transgresses the everydayness and becomes both something amazing and something vulgar, exposed and yet hidden in many social contexts.

Reading this novel reminded me of the biography of Tattoo Theo and him meeting his own mentor and master, Christian Warlich. The novel has the same ‘old times’ touch and feel of authenticity to it and reminds me of the long-gone past of the trade that still tries to establish itself as an art form.

A very good novel about the old times, tattoos, loss and gain, love and hate and many other things, that’s what this book is about.