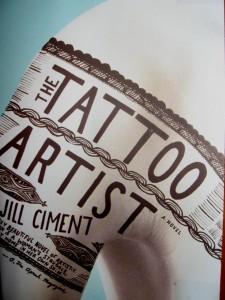 It’s a simple book in an inconspicuous cover but its contents may be deep and shallow, interesting and trivial, unique and unoriginal. It’s a complex book that, I think, may be read in many ways, depending on who is actually doing it.

Four parts of the book, City of Coffins, Gan Eden, Body of Work and On Display, show the main character, Sara Ehrenreich, in four main stages of her life and in the process of creating and then becoming art.

The idea of a woman stranded on a distant, tropical island and then forcefully tattooed is not new and it was already used countless times by sideshow artists in the past. The author uses it skillfully, though, and instead of an illiterate farmer’s daughter or an adventurous sailor we’re introduced to a Jewish shopgirl dreaming of becoming a part of avant-garde movement in NYC, filled with feverish dreams of the better future for the poor. When the Great Depression hits hard, Sara and her husband Philip set out to the South Seas to collect masks for a European museum. What was supposed to be a chance to escape the Western nightmare and a passing adventure turned out to be a lifetime experience. Once on the Ta’un’uu island, they involuntarily cause a problem resulting in death of a few islanders and their faces are forever changed by tattoos obscuring their features. During next decades Sara becomes a skilled tattoo artist herself, using her talent and tools not only to adorn her own body and those of the villagers but also, or maybe above all, to commemorate people and events dear to her and by means of which to cope with her losses and misfortunes. It’s a process that transforms her and allows her to see her own and others’ life from a new, different and richer perspective.

The language the book is written in is simple and some of the points the author makes are very obvious (‘tattoos as a pictorial narrative,’ ‘permanence is what gives the tattoo its power,’ ‘tattoos aren’t written on the skin, they’re written inside the skin’) but they can resonate quite deeply with a reader, especially if a reader is tattooed themselves and claims to be passionate about and committed to their tattoos.

Seeing how I’m tattooed myself and how I’m pretty convinced that body modification is one of the main passions of mine I couldn’t resist to look at the book from this perspective.

I see this book as a novel about life imbued with art to the point of finally becoming a living art but it’s also about tattooing itself, both in its first, ‘tribal’ form and this evolved, ‘bastardized’ form present in the Western society (when Sara is back in NYC, after decades spent on the island, she visits a tattoo shop and both the atmosphere present at the shop and the artist himself differ so strongly from what she experienced that she must feel lost. Her tattoos are a part of something bigger and older while the NY artist’s tattoos are just flash, totally cliché and meaningless in their countless and mindless repetitions on people’s arms and backs).

The book is about one woman’s life but it’s also about tattooing itself as in asking questions what tattooing really is, how it can affect people and the way they look both at themselves and the others, how it defies our (as in ‘Western’, ‘civilized’) concept of pain and how it creates and unites beauty and pain.

One of the points Ciment makes, I think, is the effect of tattoo on us. While on the island Sara is slowly becoming a part of the Ta’un’uu society and being incorporated into their Tapestry, a creation of tattooed bodies replaying the same elements and meanings over and over again and thus cultivating the values and traditions of the society; when back in the Western world, Sara becomes a curiosum, an other whose looks and actions are incomprehensible to people. Leaving the island Sara removed one element of the Tapestry, herself, but she also felt that ‘her absence hardly marred the grand design.’ Appearing back in the civilization, Sara is only a passing attraction; she doesn’t bring anything of importance to those looking at and reading about her and soon they’ll move their attention to new people and events. In a way, it shows how the Western society perceives and uses tattoos – not to embrace people but to set them apart, not as a sign of belonging but rather a warning – but also how alienated we all are.

Ciment writes about tattoos with respect. I don’t think she’s tattooed herself but she’s able to notice in them feelings and stories that may be in there. She sees the vast anthropological background and the personal potential at once and invites us to reflect on the subject on our own.

3 responses to “book review: The Tattoo Artist: A Novel”