It was my second trip to Hungary and, as before, I came back with lots of warm feelings toward this country – beautiful landscapes, an awesome cosmopolitan feel to its capital, a very interesting language which I don’t understand at all and pretty cool people I’ve come across so far!

Hungary shares history with Poland to a degree and there are many similarities between both countries, so there’s also this ‘almost like home’ feel to my trips there but since I never go there only to play a tourist but mainly to get a body modification done, let me focus on that.

Since Budapest is the biggest Hungarian city, it probably also has the highest number of tattoo and body piercing shops in the country. They are not hidden in the back alleys or small dark streets but rather quite in the open and one of them, Celtic Moon, proudly displays its work on the most popular street in Budapest, Vaci utca. When I entered this shop, I could see nicely done interior, artists busy at work and a customer waiting for her turn. They didn’t have any of their portfolios lying around but when I asked for it, I got it right away. They seem to accept walk-ins if the time allows but, obviously, you would need to wait for a bigger piece to get done. The guy I talked to claimed they’re always ready to go for custom pieces and the portfolio I’d flipped through showed nice, clean work and some pieces were even more than just interesting.

When I was in Budapest two years ago I visited another shop, Pinker Tattoo, also located on one of the main streets, and even though the interior design was rather on a darker side, it still had a clean feel and the guys there were very welcoming and helpful.

Hungary has a few tattoo magazines being published on regular basis and even though I can’t read Hungarian at all, their layout and pictures in show that the publishers do a good job on showing their readers what’s new in the local tattoo ‘scene’ and also try to provide some information on what’s going on in other countries. Shop and equipment ads in the magazines show clearly that the Hungarian body modification scene is thriving.

The streets show that, too and even though I’d never come across heavily tattooed women or men on Hungarian streets, I could see plenty of smaller pieces on people and many young people have various body piercings, stretched ear lobes included.

My own experience tells me that there’s a huge difference between North Americans and Europeans when it comes to reactions to unusual appearance. In the USA I was often asked about my tattoos or people at least commented on them; in Europe it’s usually more about stares and people seldom approach others to inquire about their body art or voice their opinions on the subject (this may be just me, however, so I wouldn’t venture here any sort of generalization!). This time was just like that, too, and people’s stares were omnipresent. No one, however, made me feel unwelcome or was rude to me and my friend; it was rather more about surprise, disbelief or some amusement (I amused myself, too!)

Most Hungarians don’t seem to speak any foreign languages, so sometimes it’s hard to ask for directions when needed but you can be quite sure that local tattoo artists and piercers know at least some English or German. In all Hungarian shops I’ve been to so far there was always at least one person speaking decent English and willing to answer questions, even if they are not about getting some work done!

The shop where I got my modifications done, Black and White Tattoo, is located outside the city centre but it’s still easily accessible on foot or by tram. The shop is quite small, with three artists working there, but it has a very cozy feel to it, is nicely lit and clean! Since I got there two pretty serious body modifications done, I could watch how everything is conducted, I healed, very successfully, my scarifications and could always rely on the artist answering my questions both in person and via email, I can wholeheartedly recommend this shop to anyone!

On one of my walks around the city centre (or rather hunts for fast food court to score some free ice cubes;)) I found a Don Ed Hardy store. Not on a big street but very close to it, the store displayed lots of clothes with various tattoo design by Hardy and I couldn’t resist the temptation to get a closer look. Funnily, and probably not very surprisingly, the staff working there had no visible tattoos. Hardy clothing line(s) have much to offer now, with swim suits, tops, bags and what not. Colors are bright and designs pretty interesting and nicely traditional but I couldn’t stop shaking my head over such a display of commercialism and attempts to make tattoos a sort of accessory only.

Since Hungary is pretty hot in summer I’d definitely recommend to take at least a few tubes of strong sunblock for a trip – it’s a must no matter whether you have tattoos to protect or not.

Night life in Budapest is worth experiencing , too, with many street cafes, fancy restaurants and, since the air feels just right after the sunset, long summer evenings are a great time for going for a walk along the river or even main streets in the city. The food is delicious and even though I couldn’t eat much this time around (becoming an expert on ice cube shapes available in Budapest probably doesn’t count), my travel companion tried local dishes, such as fish soup or goulash, and had only nice things to say about them! The dessert below, though, I ate personally! 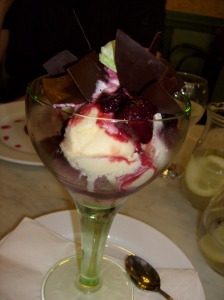 Since Hungary is not only its capital but also many great places in the country, I made sure to visit Vac, a small town near Budapest, and went for a trip to the Danube Bend which was really breathtaking. I wanted to visit Tokai this year but the heat and sleeping in late got in the way, so maybe next time. Hungary deserves more than just one passing visit!

3 responses to “loose notes on my Hungary trip”